There are so many reasons to visit the ‘Pearl of the Indian Ocean’. With a fascinating human history dating back well over 2500 years Sri Lanka is brimming with timeless ruins, temples and ancient rock fortresses. Pristine rainforest and perfect beaches abound and there is wonderful assortment of wildlife in the country’s excellent national parks. On our Byroads Sri Lanka tour you will experience all of this and much more.

Sri Lanka has had a magnetic appeal for many centuries and its gems, pearls, ivory, and spices have always attracted the attention of seafaring traders. Marco Polo visited the island twice, first in 1284 and again in 1293. Less than 50 years later his Moslem alter ego, Ibn Battuta, arrived and was entertained as a guest of the Tamil king. The Portuguese landed in 1505 and gradually extended their control over the coast, forcing the indigenous inhabitants inland. By the middle of the 17th century, the Dutch were in the ascendancy and at the outset of the 19th century the British East India Company took full possession of the island, under a treaty known as the Kandyan Convention, signed in 1815.

After exploring Colombo we drive north east to Sigiriya, stopping enroute to explore the amazing cave temples at Dambulla. From our hotel we visit the ancient ruins at Polonnaruwa, and the next morning we climb the spectacular rock citadel at Sigiriya. We then head south, taking a scenic by-road through the Knuckles Range, to the old Sinhalese capital at Kandy. Time here to explore before continuing up into the highlands at Nuwara Eliya, the heart of the tea growing industry.

To the southeast is Ella, the nicest of the hill towns, where we walk up to ‘Little Adam’s Peak’, and spend a morning learning the secrets of Sri Lankan cuisine. Driving south we see the tallest Buddha statue in the world before reaching Ude Walawe National Park, Sri Lanka’s premier elephant reserve. We enjoy an afternoon jeep safari and then drive to the celebrated south coast for a night at a beach hideaway. Our final highlight is Galle, a perennial favourite, where we have a full day and a half to explore. On our way back to Colombo we visit the mask museum at Ambalangoda and take a boatride on the Madu River. Our journey ends back in Colombo. 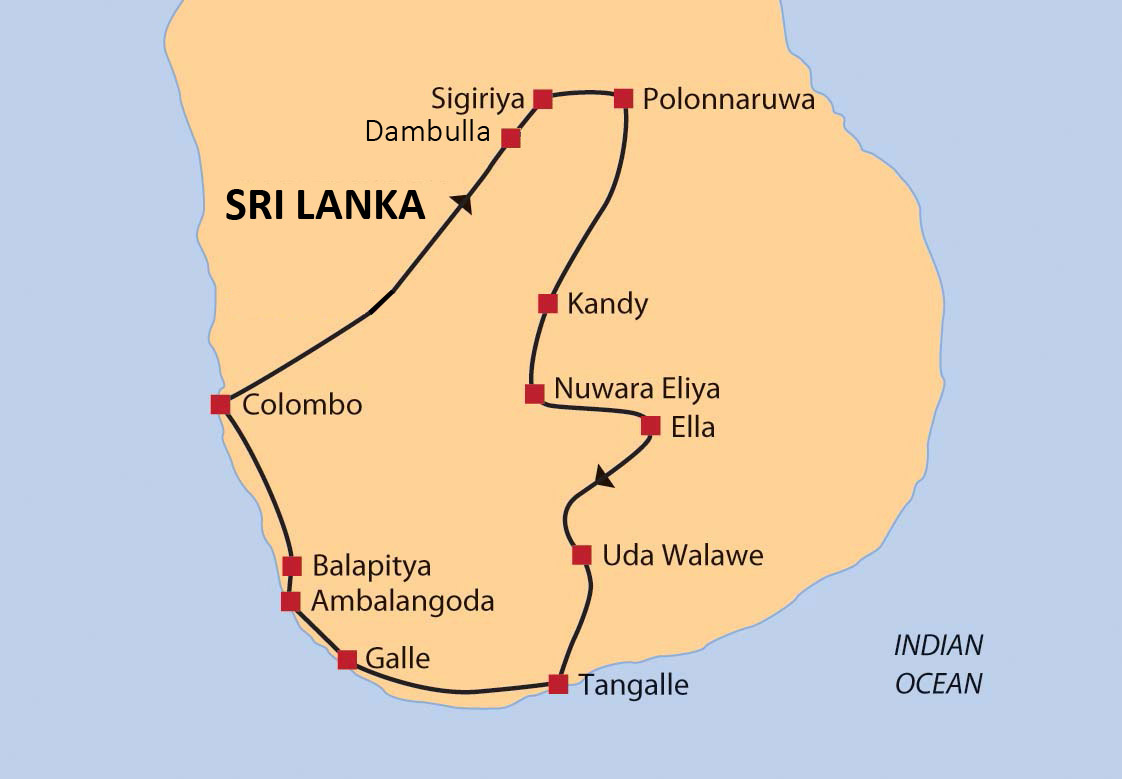 * Paid in Australian dollars calculated on the due date using the bank buying rate for US Dollars cash.