Turkey sits at the crossroads of history with cultural connections dating through the Greek, Roman, Persian, Byzantine and Ottoman empires. On this Byroads Turkey tour explore the major highlights as well as lesser-known ones that others often miss.

Beyond the popular sites along the Aegean coast there is also much to see and do in Turkey’s hinterland. This tour takes in three well-known highlights: Istanbul, ancient Ephesus and Cappadocia – and in each place we offer more than the normal sightseeing fare. In addition, there is a special focus on the region that lies between northern Anatolia and the Black Sea, which boasts many wonderful Ottoman era towns and villages.

We spend four wonderful nights in Istanbul allowing plenty of time to see all the best sites before flying south to Izmir and to the amazing Greco-Roman ruins at Ephesus, staying in our boutique hotel in the lovely village of Sirinci. Nearby are the world heritage sites of Pamukkale, known for its white mineral terraces and rich thermal waters and the well-preserved ruins of Hierapolis.

Further on we visit the capital of Ankara before arriving in the province of Karabuk. The region boasts some of the most perfectly preserved Ottoman towns in Turkey. Of all the typical Ottoman villages that remain in Turkey, World Heritage-listed Safranbolu is acknowledged as the jewel in the crown; a picture-postcard town that established an architectural standard that flowed over a large area of the Ottoman Empire. Arriving on the Black Sea coast at Samsun we enjoy a local fish lunch and a boat ride through the spectacular Sahinkaya Canyon.

Further south is Amasya, a charming place where half-timbered houses jostle along the riverbank, back-dropped by Pontic tombs built in the 2nd and 3rd centuries BC. Continuing our travels we stop at another World Heritage site: the ancient Hittite capital of Hattusa, dramatically positioned high above the Bodakozu River Valley.

Finally we arrive at Goreme in Cappadocia, an ancient town literally carved into the volcanic rock. Here we stay in a lovely cave-style hotel and spend two full days exploring some of the more curious sights in this extraordinary region. We then fly from nearby Kayseri back to Istanbul where, after an afternoon spent exploring the lovely waterways of the Bosphorus by local ferry, our trip comes to an end. Additional accommodation and a full day excursion to Gallipoli are available on request. 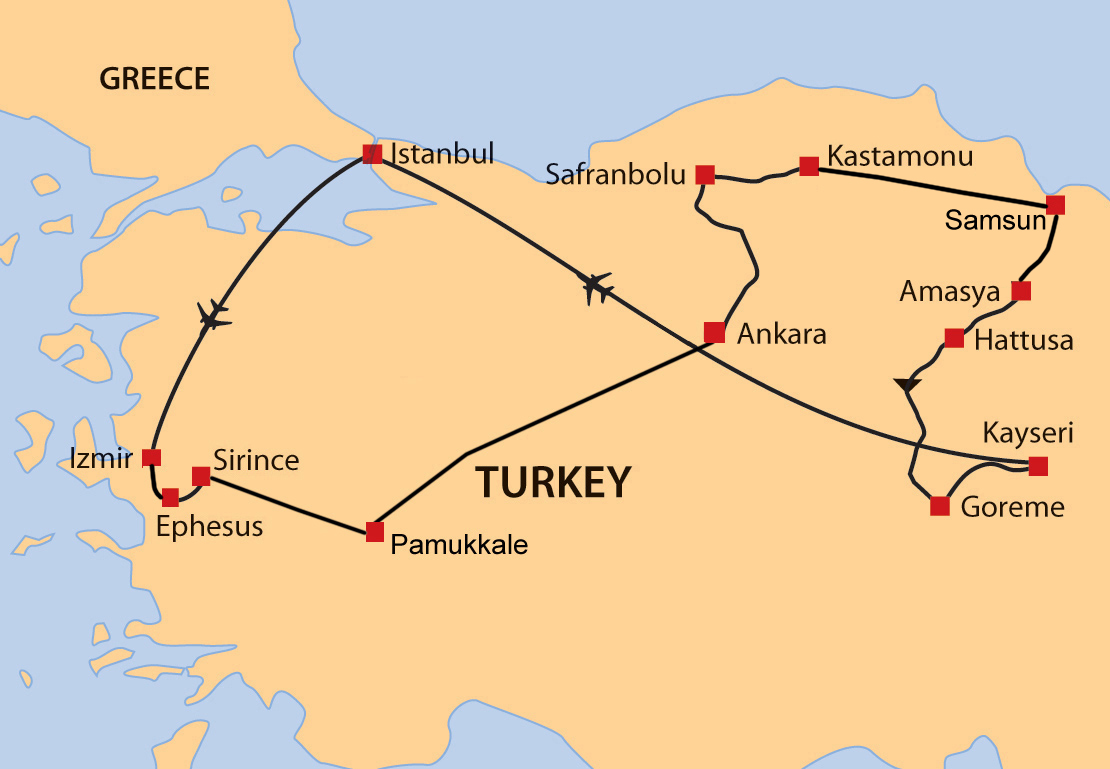 * Paid in Australian dollars calculated on the due date using the bank buying rate for Euros cash.